The specific regulation on chemicals in the EU is called REACH. It is the regulation concerning the Registration, Evaluation, Authorisation and Restriction of Chemicals.

It requires manufacturers and importers of chemicals to register each substance they make or place on the market in quantities exceeding one tonne in a central database managed by the European Chemicals Agency (ECHA). The chemicals manufactured or imported in high volumes more than 1 000 ton per year were to be registered by 2010, those in the middle volumes (100 to 1 000 ton per year) by 2013 and the small-volume chemicals (1 to 100 ton per year) by 31 May 2018. Europe has now created the largest chemical database in the world with 21 551 chemicals registered including petrochemical products.

A study commissioned by the European Commission estimates that the cost of EU regulation (REACH and environmental legislation) doubled from 2004 to 2014.

REACH, which entered into force in June 2007, includes the obligation for a review every 5 years in order to monitor progress in the achievement of its objectives. The second REACH Review, which was due in 2017, was carried out in parallel with the fitness check, “REFIT”, on the most relevant chemicals legislation excluding REACH.

Implementing REACH is still a challenging task for Small and Medium Enterprises. The REACH Regulation (entry into force in 2007) deadline (31 May 2018) to register existing chemicals with the ECHA has passed. However, the registration is only one aspect of REACH, Regulation, Evaluation and Authorisation/Restriction being the complementary ones. All these phases and aspects require constant work from industry as well as active involvement from ECHA, the European Commission and the national competent authorities. In order to help its members and other actors in the supply chains, Cefic, the organisation to which Petrochemicals Europe belongs, has developed a number of guidance documents and tools to support companies in the implementation of REACH as well as to enhance harmonisation of procedures.

From 2004 to 2014, the EU adopted a number of laws that affected European chemical companies. A recent European Commission study concludes the new laws added nearly €10 billion euro per year to the industry’s regulatory costs borne. It represents a doubling of regulatory costs for EU chemical producers over one decade.

The European Commission’s industry department, DG GROW, commissioned a study to a consultant, Technopolis, in order to analyse the cumulative costs of EU legislation on the chemical industry in the 28 EU Member States from 2004 to 2014. The study shows that the most costly regulations are the ones on industrial emissions, accounting forting 33% of the costs, chemicals (29%) and workers’ safety (24%). Energy legislation also increased the cost burden, especially after 2012. 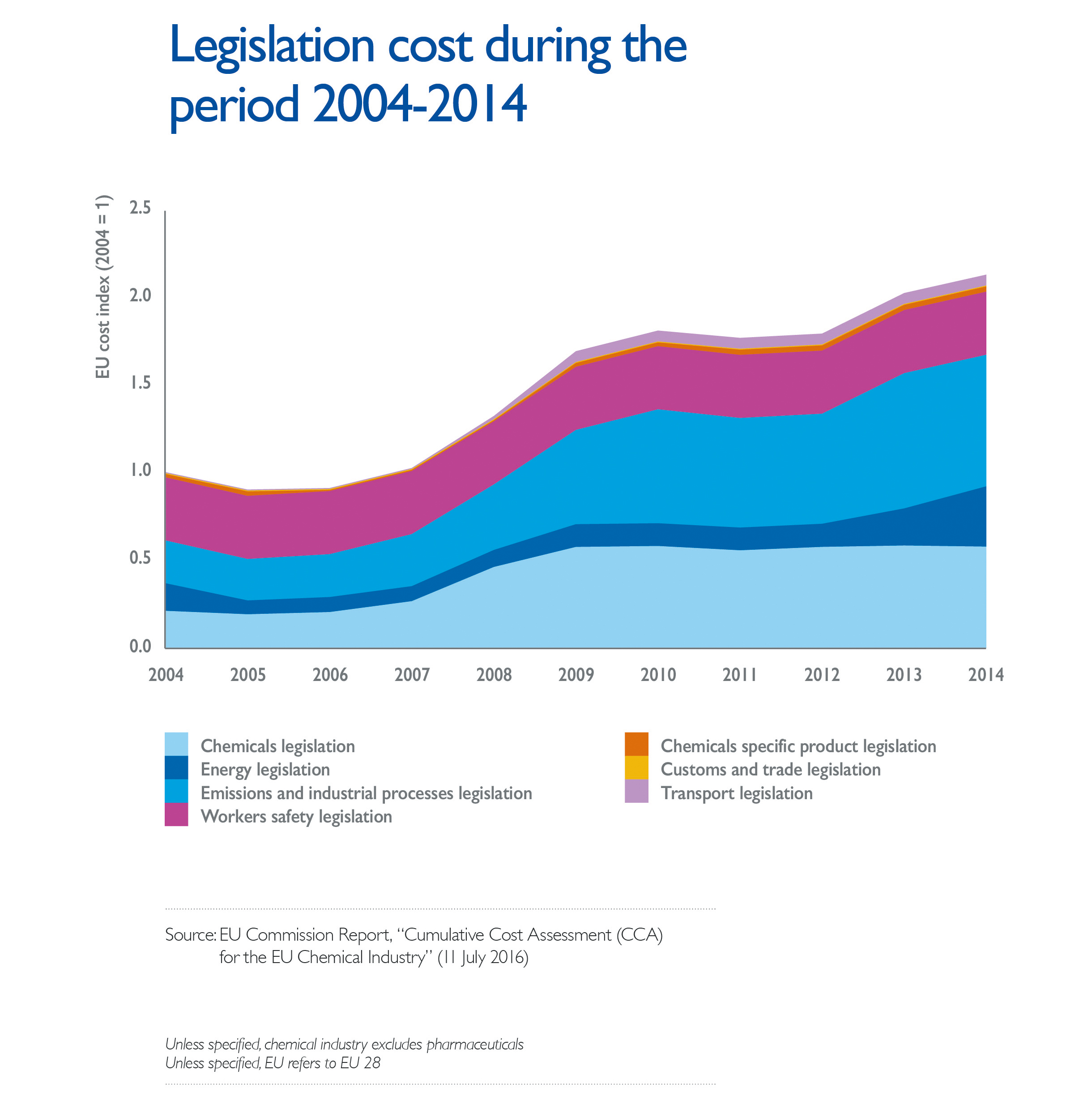 Regulatory costs are impacting profitability of the EU chemicals sector 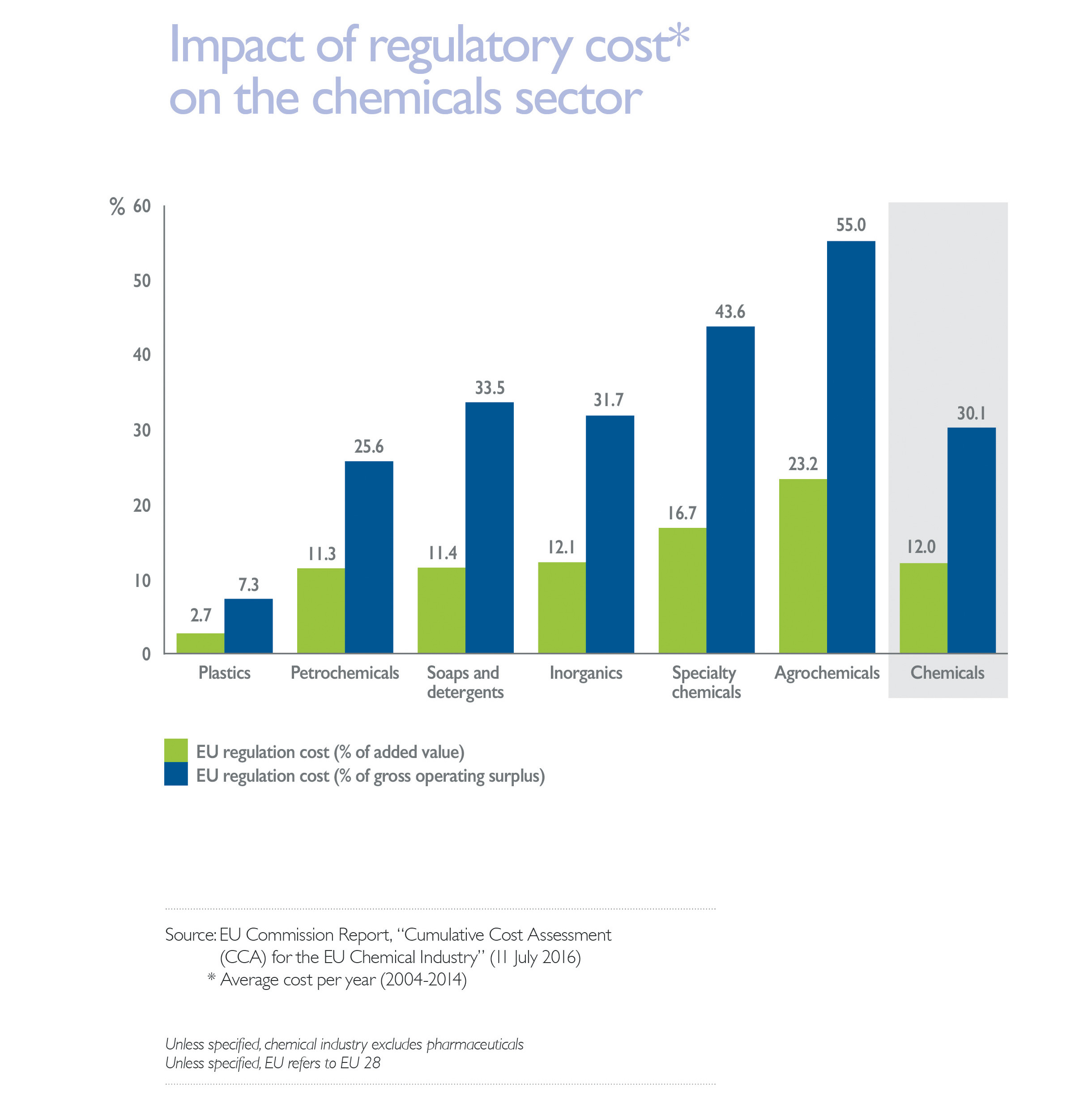 The Petrochemicals industry in Europe can measure the effects of complex, costly regulation every day.
The report summarises facts, not opinions, and illustrates the dimensions of regulation and their effect on the profitability of European chemical producers.

The results will hopefully help draw the right conclusions for future regulations –and encourage policymakers to identify better, smarter and more cost-efficiently ways of legislating to avoid additional financial burdens for European producers by, for instance, harmonising reporting obligations for companies or streamlining EU and national regulations to avoid duplication of work.

Complying with EU legislation in order to ensure the protection of human health and environment remains a top priority for European chemical companies. However, it should be done at the lowest cost possible to maintain Europe’s competitiveness and attract investments.

You can opt in by clicking on the cookie types below: