The EU chemicals sector continued to grow during the first quarter of 2018, but at a slower pace due to the Eurozone economy’s slowdown. Exports to the US rose by nearly 20% in value compared to last year. Petrochemicals accounted for 87% of the exports’ increase, although production decreased. 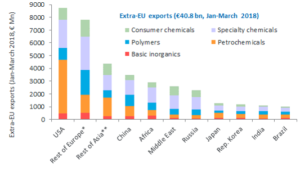 Petrochemicals have to compete against Middle-East producers with advantaged oil and gas feedstock and shale gas-based petrochemicals from the US. Unlike specialty or fine chemicals, petrochemicals operate under classical commodity business conditions: customers buy exclusively on price. Oil and gas as feedstock and energy account for 80% of their production costs and European energy prices are amongst the highest in the world. Therefore, creating a harmonized and secure EU energy market at competitive prices is key to the industry’s competitiveness.