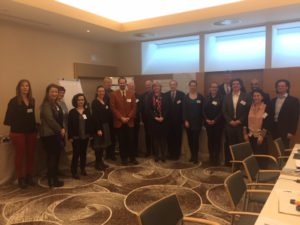 Following the successful first NMP Roundtable in November 2018, ECHA and Petrochemicals Europe jointly organised a second NMP Roundtable on February 12th. The meeting focused on reviewing the first draft guidelines and on identifying still existing gaps with the target, to ensure effective and practical advice to all NMP users along the value-chain.

ECHA is currently preparing guidelines to help downstream users comply with the recently published NMP (1-methyl-2-pyrrolidone) REACH restriction, requiring them to implement measures to limit workers’ exposure within two years. The agency had asked Petrochemicals Europe – an industry sector of Cefic – to actively contribute to the guidelines, for example by facilitating the outreach to industry experts and value-chain partners. ECHA had published a first draft report in early January, circulated to the participants in the first NMP Roundtable and to other stakeholders for comments.

Participating companies committed to providing further information on the topics discussed in the first draft and additional good practice examples. ECHA will now use the consultation feedback and the outcome of the Roundtable discussion to prepare the second guideline draft, which will then be submitted to the March CARACAL meeting for further consultation with Member States’ REACH experts. It will also be shared with DG EMPL’s Working Party on chemicals and stakeholders who participated in the earlier steps of the process.

The guidelines should be published in summer 2019. The Roundtable participants committed to promoting the document and be part of other communication activities that will take place during the second half of the year.