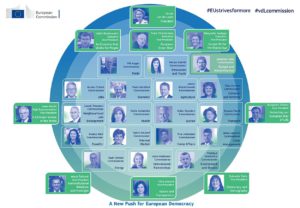 She presented her team with allocated portfolios at the beginning of September. The hearings of the Commissioners-designates by the European Parliament are currently taking from 30 September until 15 October. The Romanian Commissioner-designate, Rovana Plumb and the Hungarian one, László Trócsányi were already rejected, which means that new Commissioners need to be designated by these countries. The European Parliament will then vote to approve the whole European Commission at the end of October before the Commission takes office on 1 November.

The European Green Deal is one of the top priorities of President-elect Ursula von der Leyen. Its goal is for Europe to become climate-neutral by 2050. It requires investment in innovation and research, a redesign of the EU economy and an updated industrial policy. It will include the extension of the Emission Trading System to the maritime sector and gradual reduction of free emission allowances for airlines, a carbon border tax, compliant with World Trade Organization rules, the revision of the Energy Taxation Directive. The implementation of the European Green Deal will be crucial for the future of the European petrochemicals industry.

For further information, please read the next Commission’s political guidelines, A Union that strives for more, and Timmermans’ mission letter.