The petrochemicals industry is a substantial contributor to Europe’s economic development and represents over 25,9% of the European chemical industry turnover which generated €597 billion in sales in Europe in 2016.

A major global player, the European chemical industry in 2016 accounted for 15,1% of the world’s chemical sales that amounted to €3.360 billion. Made up of 29.000 companies, 96% of which are small to medium sized enterprises, it employs 1,14 million people.

As one of Europe’s leading manufacturing sectors, the chemical sector competes on a global stage and requires constant investment and innovation to remain competitive. Although the value of the EU’s chemical production has consistently risen, its market share has decreased as other markets, notably the developing world, step up their own domestic chemical production.

The petrochemical sector underpins much of European manufacturing as it is an important source of materials for downstream industries using polymers and synthetic rubbers to produce many everyday consumer products. Such products also are used by many other industries as vital resources for production, for example, in manufacturing light-weight automobile parts which in turn helps to conserve energy every time a car is run. 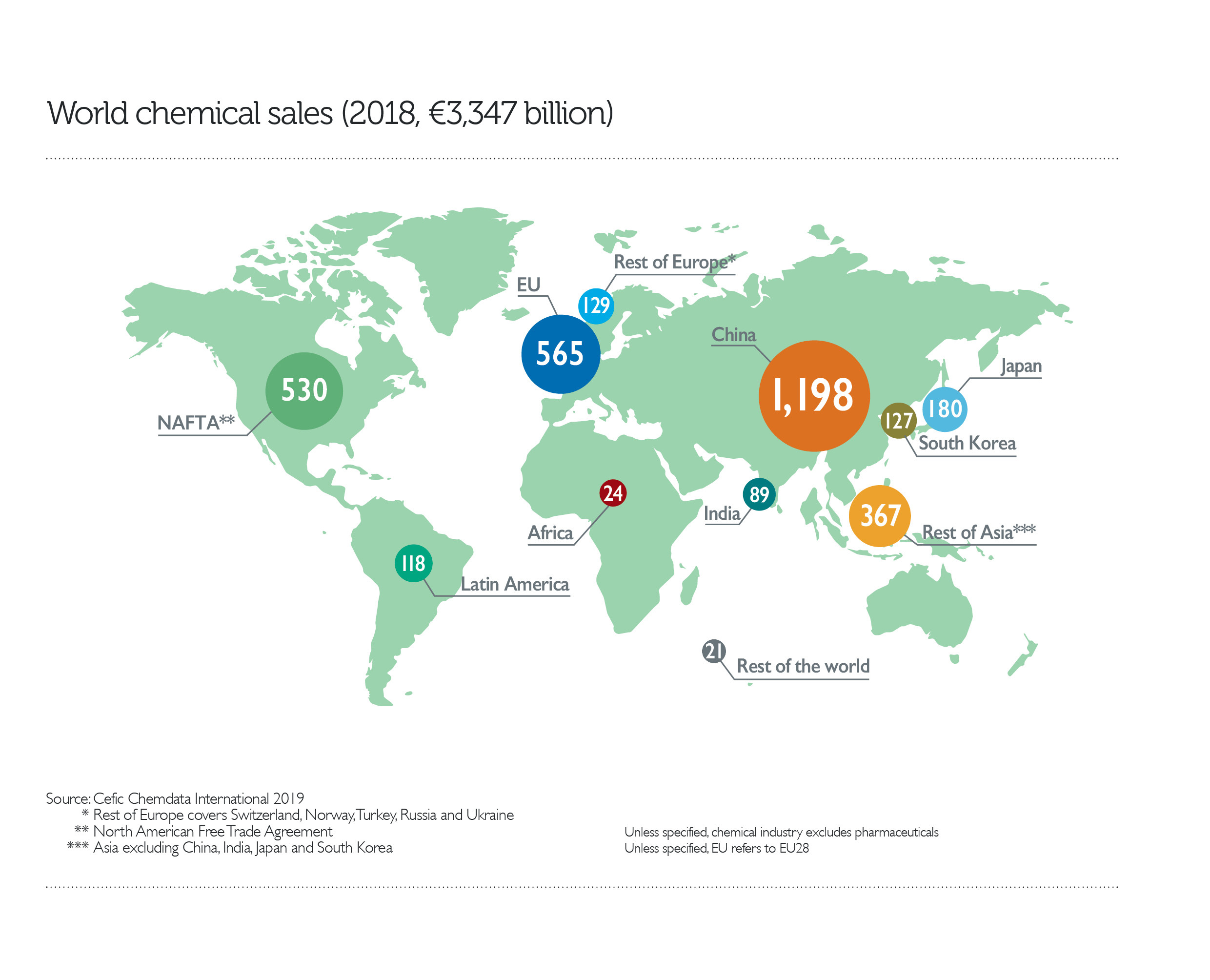 A vital link in the EU’s economic value chain

There are a vast number of products relying on petrochemicals which are impossible to quantify but which are essential components in society today.

A tyre may be worth a lot less than a car, but without a tyre, the car cannot drive. This scenario is multiplied many times over when all the various products made with petrochemicals are considered.

There is an integrated relationship whereby manufacturing sources its chemical materials locally and the chemical industry serves a home market. Should one or the other of these move out of the EU, it is very likely that the other would follow giving other markets added impetus to invest and develop their own chemical industries to supply their domestic manufacturing demand.  Such a potential loss of demand for European chemicals would undoubtedly impact the development of the sector and affect the number of jobs it provides. Similarly, the loss of the manufacturing industry would result in further job loss. Combined, such a result would have a hugely detrimental impact upon EU’s economy. 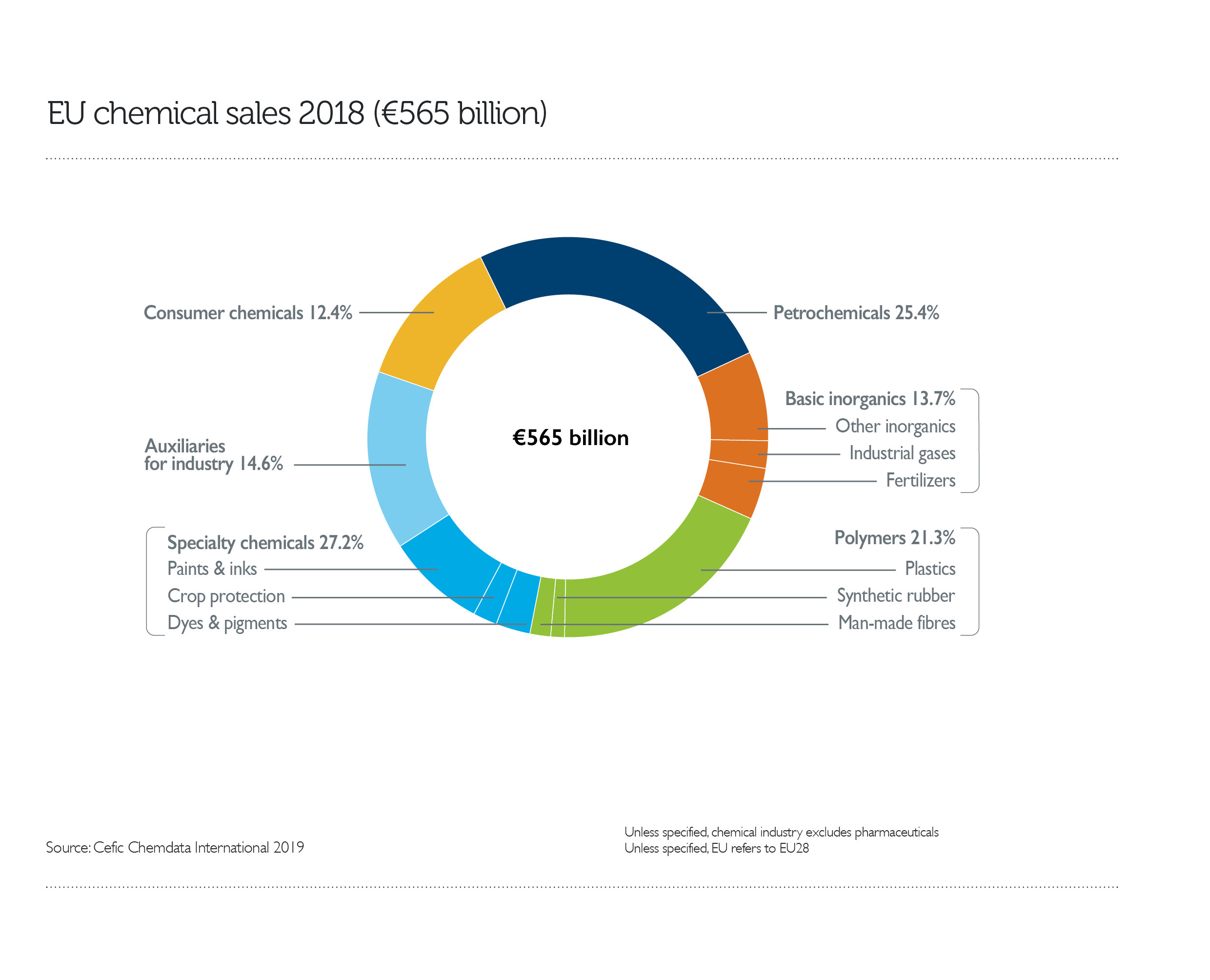 The Petrochemicals industry employs over 300.000 and indirectly another two to three times that amount ensuring the provision of over one million jobs.

Whether the employment provided is direct or indirect, the sector provides a great many people and their families with economic means. In such highly educated roles such as those typically held by employees in the petrochemical sector, the salary is accompanied by generous healthcare and pension plans. The type of compensation packages held by employees enables them to be self-sufficient and positively contribute to society and the economy.

Investing in education and training

Due to the high-level nature of the work in the petrochemical sector where technological processes are in constant evolution, personnel are highly educated.

The petrochemicals sector makes substantial investments in education and knowledge development through its hundreds of research contracts with laboratories, universities and institutes.  This educational focus aims to ignite an interest in students in the fields of chemistry and science from a young age and for older students, to increase process and products knowledge while boosting productivity and minimising the use of raw materials and energy.

To view how the chemical industry supports education programmes, you can visit the website of the initiative, Ingenious Science and visit the SusChem website for academic and innovation programmes.

The substantial investment in education and training for employees in the European chemicals sector has seen personnel costs rise by 3% annually compared with increases of only 2.8% among the manufacturing sector.  The graph illustrates that the European chemical sector is the lead sector in terms of cost (and therefore investment) per employee.

For further information, read our position paper on the attractiveness of the industry.

In an article written for Chemistry Today, Dorothee Arns, Petrochemicals Europe’s Executive Director, explains the importance of the industry in EU’s economy and the macroeconomic factors shaping it. Click here to read the article.

You can opt in by clicking on the cookie types below: